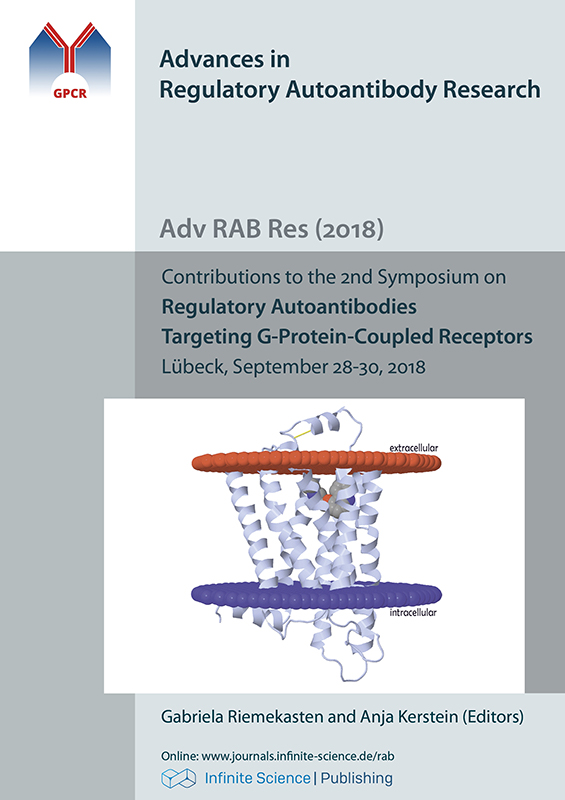 Introduction: Preeclampsia (PE) is associated with an increased cardiovascular risk in later life, especially in women after early-onset PE. We and others have shown that activating antibodies against angiotensin II receptor type 1 (AT1-) are present in women with PE, even after pregnancy. Further, regulatory (auto-) antibodies against G-coupled receptors (GPCR) have been shown to contribute to cardiovascular disease.
Hypothesis: Regulatory autoantibodies’ titers are elevated in women with a history of early onset PE and correlate to physiological parameters and clinical outcomes.
Methods: Autoantibodies against AT1-, ?1- adrenergic receptors, endothelin I receptor A (ETAR), protease-activated receptor 1 (PAR1) and C-X-C3 chemokine binding receptors (CXCR3) were determined by using commercially available ELISA (Celltrend, Luckenwalde, Germany) in women 10 years after after PE pregnancy or control pregnancy. We investigated samples from the PREVFEM cohort (PReeclampsia Risk EValuation in FEMales), a retrospective matched case-control study, which was performed in Zwolle, The Netherlands, from 2008 until 2010. All women registered in the early preeclampsia database as well as an equal number of age-matched females without preeclampsia from the regular obstetric database in the same time period (1991-2007) were invited to participate in the PREVFEM study.
Results: Women with history of early PE had higher prevalence of hypertension than controls (42.7% vs 8.3%, p < 0.001). Women with the lowest combined levels of autoantibodies and a history of early PE had significantly higher SBP (mean difference = 11.54 mmHg, 95% CI [4.39; 18.70], p < 0.001), DBP (mean difference = 7.75 mmHg, 95% CI [2.42; 13.08], p < 0.001), and MAP (mean difference = 9.02 mmHg, 95% CI [3.24; 14.79], p < 0.001) compared to the controls. The titer levels of single regulatory AT1-, ?1-, ETAR-, PAR1- and CXCR3-autoantibodies were not different between control and former PE women 10 years after index pregnancy.
Conclusions: Hypertension is a common problem after preeclamptic pregnancy in middle-aged women. Regulatory autoantibodies are not sufficient alone to cause hypertension or other pathologic conditions, but together with other risk factors such as pathological pregnancy might drive the whole balance towards pathophysiologic conditions. Further studies are needed to investigate the potential of regulatory autoantibodies against GPCR as presymptomatic biomarkers identifying women at particular cardiovascular risk.